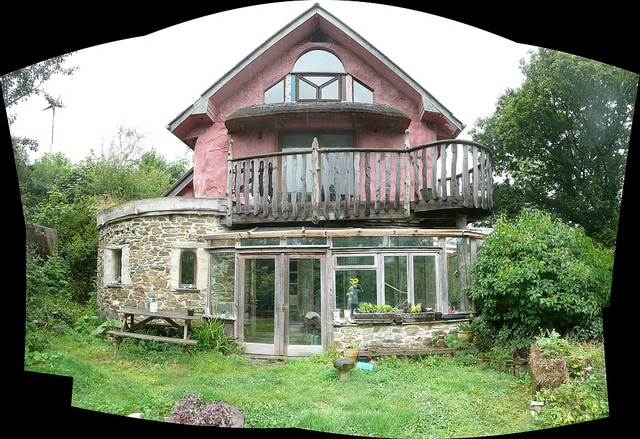 Ecomotive is a workers’ co-operative which grew out of the Ashley Vale self build project in Bristol. After they had completed their own self build home, Jackson Moulding and Anna Hope wanted to be able to offer other people the same opportunity to design and build their own homes in a community setting. And so Ecomotive was born. Our name (Eco = from the Greek root of ‘home’; Motive = ‘reason for action’) symbolises the way in which we take action to create opportunities for more sustainable homes, and empower others to do the same. Over the years we have grown and evolved, building up a strong core team supported by an inspiring collective of professional associates and volunteers.

Ecomotive operates in many different spheres, from the grassroots through to the national policy arena. You might equally see us giving a presentation at a housing conference or a spontaneous radio interview on the stage of a music festival. We are passionate about what we do and are willing to go the extra mile in order to bring quality to every area of our work. We especially love to get hands-on, and a highlight of our year is building the Ecomotive ‘structure’ at Glastonbury Festival. Our ethos is to be creative, flexible and solution-focused and we enjoy taking on a bit of a challenge!

How it all began – Ashley Vale, Bristol

from left to right – individual houses, the communal village green area, bungalows, the terrace of houses and, (bright red), the flats above the workshops and community centre. This is one of the most interesting recent examples of group selfbuild in the UK, not only because of its commitment to green values but also because of the way it started, the variety of types of buildings, the extensive community involvement and the effort made to incorporate affordable housing.

It also includes several collective initiatives such as a ‘village green’, a community centre, a shared landscaping commitment and a (hard to define) inclusion of the skills and supportive efforts of many people who are closely associated with the place but don’t actually live there.

For instance one of the directors of the group, Mike Harvey, a close neighbour though not one of the self builders, has taken on an interesting role as a visioner, coordinator, designer and builder for the group. Various other people have been very supportive to the group such as the father of one of the self builders who is a retired sewage engineer with a broad experience in mechanical services. He has advised and helped with the infrastructure servicing of the site which had all to take place above the enormous existing concrete slab covering the site. (see more on this below)

the building site before work began

In the late 1990s a site, which had previously been a yard owned by a scaffold supply company was about to be bought by one of the volume house builder. A group of 7 or 8 locals wanted something a bit more ‘home grown’ to happen, something better in terms of housing and mixed use in the community. They got together and lobbied the council and succeeded in preventing the impending development. They then held a ‘planning for real’ day which attracted good local participation.

Following this the group which formed, raised the money, by means of individual mortgages, to buy the site with the financial help of the Redland Housing Association, with the intention of the housing association incorporating some affordable housing for the elderly. They made an offer with a view to buying the site and then succeeded in obtaining planning permission, to a large extent because of the strong support by people in the area and around the town.

They formed a not-for-profit limited company and the self builders formed their own group which consisted of members wanting to build four houses in a terrace, four semis, about fourteen individual houses (and eventually convert an existing building on the site to workshops, flats and a community centre). The intention was that Redland Housing association would come in to build half a dozen old people’s bungalows in the centre of the area.

As the time approached when the land transaction had to be completed there was a certain amount of drama as some people dropped out and others came in but on the actual day of completion of the sale all the purchasers with their respective solicitors met in a room with the vendor and their solicitor and the deal was done.

Unfortunately a major glitch soon occured when Redland Housing Association was placed under supervision by the Housing Corporation because of management problems and it backed out of the commitment to build the bungalows and eventually the Ashley Vale group bought the land back from them, but not before the land had (apparently by law) to be offered to every housing association in Bristol – a process taking two years! Finally the bungalows were offered for sale on the open market to recoup the land value.

Finally, through the help of a local benefactor and a bank loan, the bungalows were built to a ‘complete shell’  stage so that purchasers could then finish them internally to their own requirements. Meanwhile the self build side was progressing well with a variety of interesting designs built to a very high, but not outstanding, ecological standard (except probably the house by Jackson Moulding and Anna, and Jimmy’s house which do show a deep commitment to green design values).

There is an excellent account of the processes the group went through to achieve their aims. The office block which came with the site when they bought it is  being converted into four flats plus two rooftop studio flats, three small workshops and a community centre which will be used not only for the benefit of the group but also to promote a wider range of cultural activities in the area. Heating by a wood pellet boiler. the block after upgrading, including external insulation

The site itself was a challenge because the enormous existing concrete slab covers ground which is contaminated by previous industrial uses and it was a condition that it should not be disturbed. It was left in place and everything, including services was placed on top of it. Because of its limited strength this meant that traditional masonry construction could not be used. Hence the number of timber frame houses. See part A of the Approved Documents in the Building Regulations which deals with contaminated land.

Read all about this intelligent, innovative housing project here… 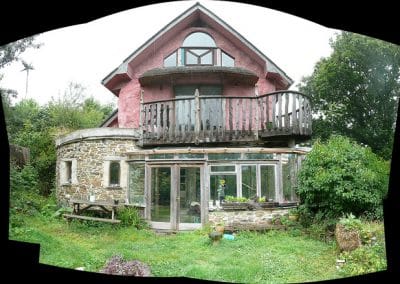 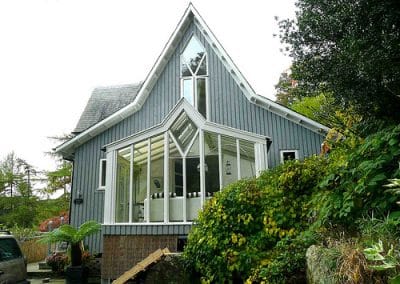 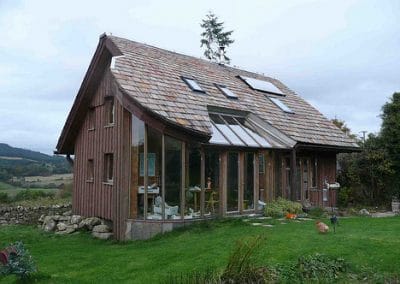 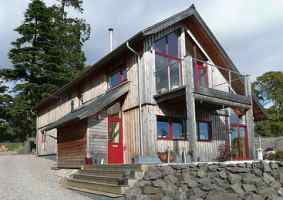 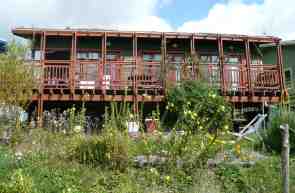 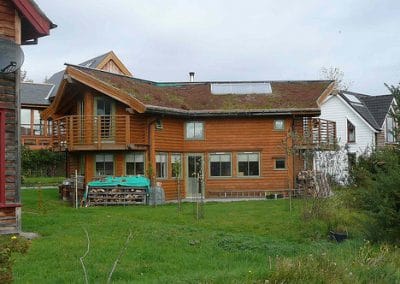 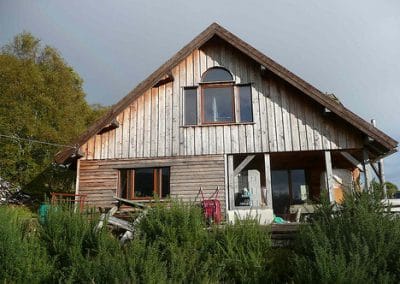 A Case Study on Ashley Vale Self Build Housing Association