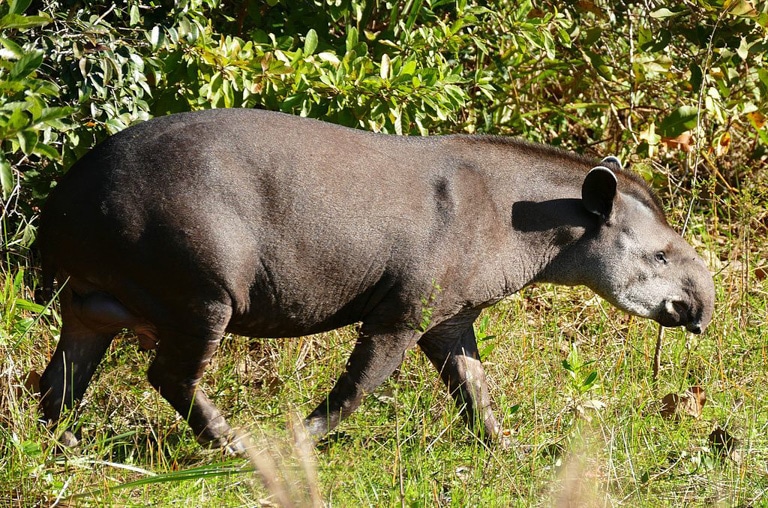 Tapirs could be key in helping degraded rainforests to bounce back

An intersting article by MONGABAY

Tapirs may help rainforests recover after destructive human use and increase the amount of carbon they hold, new research has found.

The study, based in the Brazilian Amazon, found that these fruit-eating mammals spend significantly more time in burned forests than those that are relatively untouched. As a result, tapirs leave behind more seeds in their droppings in these “degraded” landscapes.

“The role that tapirs play in seeding degraded forests is another good reason for conserving this last representative of the megafauna of South America,” Lucas Paolucci, the paper’s first author and an ecologist at Brazil’s Federal University of Lavras and the Amazon Environmental Research Institute, said in a statement.

Paolucci and his colleagues reported their findings in the journal Biotropica on Feb. 25.

Related to horses and rhinos and about the size of large pigs, Brazil’s lowland tapir (Tapirus terrestris), also known as the Brazilian tapir, is listed as vulnerable by the IUCN. The slow-reproducing animal doesn’t rebound well from intensive hunting, and its forest habitat is dwindling.

But because it’s big — stretching to 2.2 meters (7 feet) long and weighing in at 250 kilograms (550 pounds) — it can ferry around many different types of seeds, including large ones, which it then deposits in the forest with its dung.

Until now, however, most scientists have investigated this “seed dispersal” in more pristine forests. Paolucci and his colleagues wondered about the impact of tapirs in degraded forests.

At the team’s study site in the Brazilian state of Mato Grosso, the researchers went hunting for tapir droppings across three plots of forest, each with a different level of impact. Other researchers had burned the forest in one of the plots nearly every year between 2004 and 2010. In another, they had set experimental fires every three years. As a control, Paolucci and his colleagues also included a third plot that hadn’t been burned at all.

Tapirs defecated a lot more and distributed more than three times as many seeds in the burned plots than they did in the untouched forest, the scientists found. Data from airborne lidar surveys, which use laser pulses to map out the three-dimensional structure of the forest, confirmed that areas with more open canopies tended to have more dung clumps.

A set of camera traps also revealed that tapirs frequented the burned plots about twice as often as the closed-canopy forest. The authors of the study say they believe the small sprouts that bolt from the earth, thanks to more light hitting the forest floor in the burned plots, may attract the tapirs.

Tapirs carried a variety of different seeds into these degraded forests, and they were in remarkably good condition. More than 99 percent of the nearly 130,000 seeds that the researchers found in the tapirs’ dung made it through unscathed, meaning they at least had the potential to germinate. And the seeds came from 24 different plant species, suggesting that tapirs contribute to the diversity of species growing in a given area.

The team said their data suggest that tapirs are important to helping forests grow back through natural regeneration, which is “the cheapest and usually the most feasible way to achieve large-scale restoration of tropical forests,” they write.

They also suggested that tapirs, in their own way, could help fight climate change.

“When we think of climate and forest solutions, tapirs aren’t the first thing that comes to mind,” Paulo Brando, one of the study’s authors and an assistant scientist at Woods Hole Research Center in Massachusetts, said in the statement. “[B]ut our study shows they play a critical role in forest recovery by dispersing the large‐seeded species that eventually become large trees, meaning they contribute indirectly to maintaining forest carbon stocks.”

Banner image of a lowland tapir by Rhett A. Butler/Mongabay.

FEEDBACK: Use this form to send a message to the author of this post. If you want to post a public comment, you can do that at the bottom of the page.