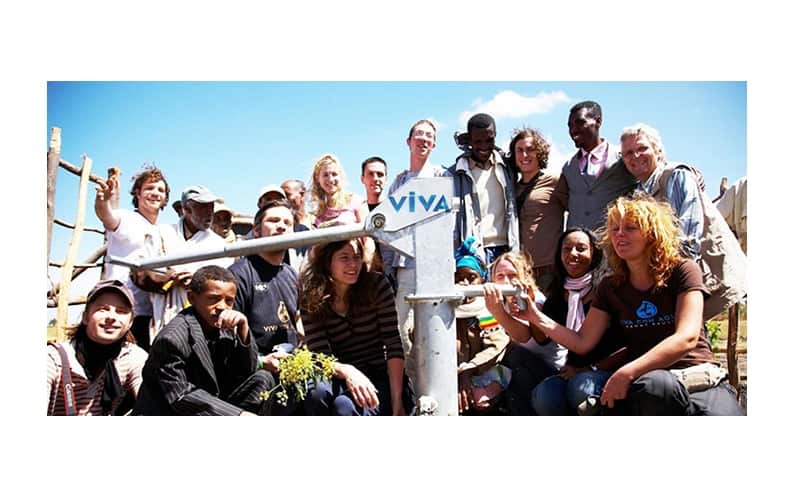 Viva con Agua – Water for All

VIVA CON AGUA de Santa Pauli e.V. is a non-profit organisation committed to ensuring that all people worldwide have access to clean drinking water. To achieve this goal, we promote water projects and actions at home and abroad and spread thereby a lot of zest for life. We are firmly convinced that even serious topics in the world can be treated with joy. The genesis of Viva con Agua is typical for the district St. Pauli:
Benjamin Adrion, former player at FC St. Pauli, joins a training camp on Cuba in 2005. During this camp, the idea comes up of supporting a project, in which kindergartens in Havana are supplied with drinking water dispensers.
Back home and in the St. Pauli district, Benny and some friends start collecting donations. And it wouldn´t be St. Pauli, if this fundraising wasn´t  loud and with a smile on the  face: At countless parties, concerts and lectures many fans of FC St. Pauli donate their talents and their working time as DJs, musicians, authors, bar staff, etc. The proceeds of these legendary events benefit the project in Cuba.
It quickly becomes clear that this kind of fundraising is not only extremely well received in St. Pauli but can also be used to finance projects beyond Cuba. Because everyone benefits and has fun with these actions, the name ALL PROFIT Organization quickly arises, because NON-PROFIT organization sounds so cheerless;)
In 2006 the organisation VIVA CON AGUA de Sankt Pauli e.V. is officially registered and recognized as a non-profit organization.
Since those early days, the Viva con Agua Kosmos has grown steadily and now stands for a network of more than 10,000 volunteer supporters. There are Viva con Agua volunteer crews in countless German cities and independent registered clubs in Switzerland, Austria and the Netherlands.
With the foundation of Viva con Agua Kampala in Uganda, since early 2015, a VcA crew has also been represented in a project country – Ugandans are collecting donations for projects in Uganda and carrying out their own projects on site. The idea of ??ALL PROFIT organization and fundraising with fun and joy has become an international idea. So, what about you!? Wanna join?