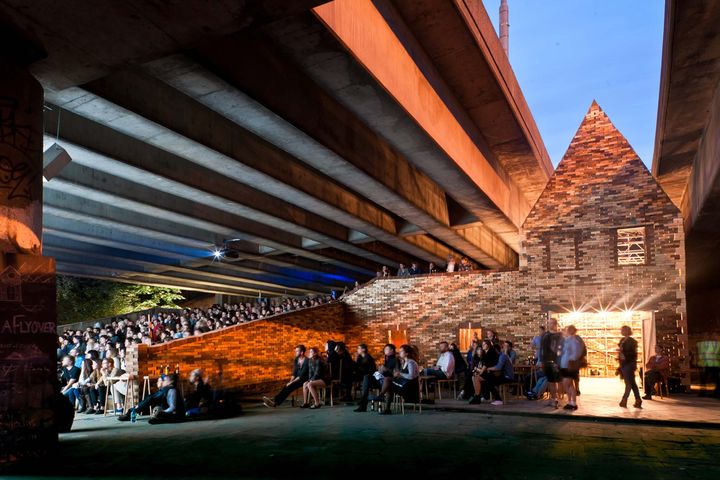 The Global Award, created by the architect and scholar Jana Revedin in 2006, every year rewards five architects who contribute to a more equitable and sustainable development and build an innovative and participatory approach to meet the needs of societies, whether they are experts in eco-construction or self-development actors for whom sustainability is synonymous with social and urban equity. The originality of the prize is to federate them in a unifying scene, enriching the global debate. Attentive to emerging scenes, interdisciplinarity and experimental learning, the Global Award is recognized as a discoverer of 21st century architects : Wang Shu, Alejandro Aravena, Carin Smuts, Francis Kéré, Al Borde, Assemble, Rotor, Bijoy Jain or Marta Maccaglia.

At the Centenary of Walter Gropius’ Bauhaus, the Global Award 2019 honors the multidisciplinary and social-reformatory aim of the Bauhaus: “Architecture is science, art and crafts at the service of society.”

Each year the Global Award for Sustainable Architecture ™ recognizes five architects who share both the principles of sustainable development and a participatory architectural approach to the needs of society, in both the northern and the southern hemispheres.

The Global Award was created in 2006 by the architect and scholar Jana Revedin, in partnership with the Cité de l’Architecture & du Patrimoine and the member institutions of its international scientific committee. In 2010 it was put under patronage of UNESCO.

The work carried out during the past ten years has assured the undisputed international recognition of the Global Award, proving its scientific independence and uniting the award winners in an avant-garde community of collective research and experimentation of architectural and urban self-development projects.

The Cité de l’Architecture & du Patrimoine guarantees the cultural promotion of the prize by publicizing the work of the architects and their contribution to the global debate. Given the cultural and political importance of this movement, since 2017 the Cité produces the Global Awards, counting on its founder prof. Jana Revedin as the president of its scientific jury.

The Global Award scientific jury is composed by :

The Global Award Community, which consists of the 60 contemporary architects and teams from around the globe who have received the award, works towards a sustainable architectural ethic and fosters research, experimentation and transmission in the fields of sustainable architecture, urban renewal and academic social responsibility. It defines architecture as an agent of empowerment, self-development and civic rights.

The Global Award scientific jury honors for their groundbreaking approaches:

– Prof. Dr. Werner Sobek for his innovation and transmission excellency, directing the Institute for Lightweight Structures and Conceptual Design ILEK Stuttgart (Germany) in succession of Frei Otto and Jörg Schlaich.

– Prof. Ersen Gürsel for his lifelong context- and society-concerned Design-pedagogy at Mimar Sinan Fine Arts University, Istanbul (Turkey), the school that since 1933 offered a home to major exponents of the Bauhaus movement – Bruno Taut, Martin Wagner and Margarete Schütte-Lihotzky, on the run from Nazi-persecution.

– Rozana Montiel (Mexico), Ammar Khammash (Jordan) and Jorge Lobos (Chile) for their dedication to interdisciplinary scientific researches as well as artisanal and artistic approaches to architecture and the public, making them understandable, desirable and affordable for all.